It’s probably too late to see another Las Vegas Hardbat Classic in July from the folks at Bud Light, who last year sponsored Table Tennis’ biggest ever prize along with a huge national competition plus a very fine Las Vegas style tournament and parties.     But rumor has it that there might be one in Miami this year – perhaps in the fall.

Gossima, the Table Tennis blog, suggested Miami may be the next venue about six weeks ago http://www.gossima.info/2010/02/hardbat-classic-2010.html.   However I’ve heard nothing since even after contacting the Hardbat Classic via Twitter, Killerspin (a sponsor last year), and the tournament director by email.

If Bud is going to host this great touranment again I hope they’ll consider doing more with social media – at the very least keeping folks posted better about what’s going on.    I think a lot of potential buzz was missed last year because the tournament details were almost impossible to find online until late in the process.   In fact many probably didn’t find out until they watched the finals on ESPN months after the event.

Table Tennis is a “cool” sport everybody knows and plays, and Bud’s idea of pushing it into a new type of competitive realm with paddle and play restrictions is great – even for “real” tournament play where the paddles and play is both too good and too fast to ever attract a huge American TV audience.

The All Star final of the Bud Light Hardbat Classic determined who among 8 high level invited players would compete against winners in the Rated Players, Basement Players, and Bar Player divisions.   This was probably one of the most exciting matches of the whole tournament because the playing level was high, Elie’s 6 point handicap against Trevor matched them up just right, and the crowd was really excited.   This match will be featured along with the tournament on ESPN in September:

Anna Kournikova looks on as Killerspin’s Biba Golic hits with the Harbat Classic’s celebrity host Judah Friedlander.    Judah’s a good player, Biba is a brilliant player, Anna’s pretty but …. not so much Table Tennis I think – Anna K refused to even hit the ball! 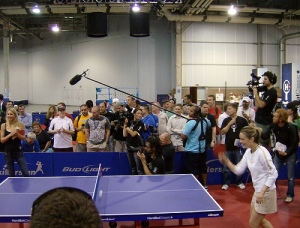 So, the greastest prize in US Table Tennis history of $100,000  is awarded to bar player Jack Baker of Mobile Alabama and the only big Hardbat news is the fight at Lavo Nightclub between a drunk woman and Anna Kournikova.  Kournikova was a featured celebrity at the tournament though she does not appear to be much of a Table Tennis player.  I never even saw her hit a ball.

Adding to the misfortune is that my wife and were right near the action at the Venetian when we chose not to go to the Lavo party after we’d had a lot to eat at the  (very excellent) Palazzo Sportsbook party by Budweiser.   Both were held on the second day of the tournament.

We might even have been able to say “hey, were were there during Anna Kournikova’s lowlife highball ping pong fracas.

Celebrity watcher Perez Hilton reports below on the fight at the Hardbat Classic in Las Vegas between Anna Kournikova and another woman at the Lavo Nightclub afterparty.

Could the offender have been angry because Anna Anna didn’t play any Table Tennis during the tournament?   Not even with her beauty and style rival the charming Biba Golic, a top Table Tennis player who unfortunately did not compete in the All Star division of the tournament, but who will be featured in the ESPN coverage coming in September.

Former tennis pro Anna Kournikova ended up with cuts on her neck after getting into a Sin City shoving match on Saturday night.

At the HardBat Classic party inside Lavo Nightclub, another woman at the club threw a drink on her and all hell broke loose!

According to an onlooker, the Enrique Iglesias‘ girlfriend/possible wife and her assistant were sitting at a VIP table when the other woman bumped them. They shoved each other but were separated.

Then, the mystery woman returned later for more trouble!

“The woman came back over and threw a drink on Anna and her assistant,” said the source. “The woman was definitely drunk.”

Anna wanted to have the women kicked out, but it escalated quickly to where the pair were pushing and shoving each other!

The woman grabbed Kournikova by the neck and pushed her into a wall right before security broke them apart!!!

Anna did not need treatment but was extremely shaken up.

Violence is never the answer!

A controversial new paddle made by Killerspin for the Hardbat Classic in Las Vegas made it very hard for many experienced players to compete effectively with each other or with the lower ranked players who often had a huge point advantage as well as the equipment handicap from making everybody use either the paddle shown here or an even cheaper “junk paddle” version.

Although I approve of the handicapping process I think they need some modifications to make a paddle that favors defender play , produces long, quality rallies rather than the short rallies this blade tended to create.   I only saw a handful of  “great points”  where we would have seen hundreds with regular sponge rubber.     I’d favor a modification that would introduce a USTTA approved hardbat and/or a sponge slow version.     Another approach might be to move to the “big ball” format which is much slower but does not destroy the fun of watching high quality loopers arc the ball back and forth many times.

Inexperienced and non- players want high quality play and this blade does not give us much of that, even when it is weilded by some of the finest players in the country as happened at the Hardbat Classic. 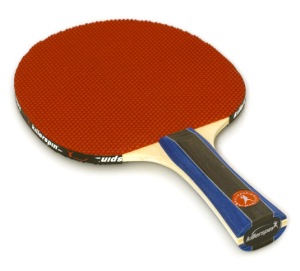 Table tennis will probably *never* be a good TV sport but it’s the world’s greatest participation sport and I think the focus needs to be on bringing people into the game rather than changing it to fit TV better.